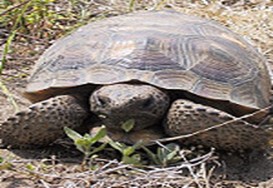 Much of the discussion about gopher tortoise relocation issues has centered on effort by private developers to either pay to have them relocated or to bury them alive and pay the fine.
The main issue is that as more and more of Florida’s native habitat is paved over with roads and rooftops, gopher tortoises and other wildlife that depend on the refuge of their burrows have been pushed to the side.

One of the tricky issues is making sure you have all of the tortoises.

This issue has come to light during the current project to widen Lake Wilson Road in the Loughman area, which lies along the edge of the Lake Wales Ridge in northern Polk County. These sandy prehistoric desert islands are ideal habitat for these creatures and the dozens of other organisms that may live in their extensive burrows.

It seems that, at least according to consultant hired to relocate these threatened species, that there may be more of them in the path of this belated road project than originally predicted.

According to the agenda at next Tuesday’s Polk County Commission, the original estimate was that were three gopher tortoises in the road’s path.

No wait, did we say three, it is five, according to the consultant’s follow-up survey.

That increased to eight and now the latest total is 13, which seems plausible considering the area involved, though it would not hurt for someone to audit their figures.

In case anyone was wondering what it costs to dig up and relocate a gopher tortoise, it’s $10,000 per critter, which brings the total bill to $130,000.

The staff report does not detail the animals’ ultimate destination, which has been an issue in recent years because of the decline in unoccupied habitat in Florida because rampant development in uplands where tortoises live and where they still survive on conservation lands.

This seems to be a good argument for conserving more of this kind of habitat in the future to make sure this iconic species persists in the landscape.