County Soil and Water Conservation Districts have been around in Florida since World War II, but suddenly a Republican legislator wants to effectively kill them.

That would be Sen. Travis Hutson, a St. Augustine developer and agribusiness ally.

First he wanted to simply abolish them. Then, after that caused a lot of political pushback, he amended his legislation that allowed only millionaire farmers or someone like that could run for public office to serve on this boards.

There has been some pushback on that, too, since the idea that there should income requirements to run for public office may have some legal issues under, say, the U.S. Constitution.

What this is really all about, or course, even though the sponsor has been shy to admit this, is another attempt by Republicans to make sure there are no Democrats elected to anything.

That’s because in some counties the Soil and Water Conservation Board is a springboard for people to get involved in local government and some of them may be Democrats. The silly part of this legislation that there are also Republicans who would be collateral damage in this partisan effort.

Let’s hope the measure gets no farther or that Gov. Ron DeSantis wisely vetoes it.

Proposed legislation working its way through Tallahassee would allow local governments and other agencies that manage public recreation lands to ban smoking because of the litter generated by cigarette butts, which contain small amounts of plastic waste.

It is verifiably true that anyone who has participated in a beach cleanup or any other kind of litter cleanup in Florida is likely to encounter cigarette butts. They often rank high in numbers if not in volume.

This legislation raises an interesting question, however.

If the Florida Legislature is really interested in reducing plastic waste on public conservation lands, especially our popular beaches, why do they focus only one type of single-use plastic and ignore the rest?

As you know, some responsible local government officials have tried to take action on these other littler issues, only to be threatened with sanctions by legislators backed by the petrochemical/plastic lobby.

There seems to be a disconnect here, but that’s Tallahassee for you.

For the second year in a row, the Polk County Commission was presented with a long list of road construction “needs” that sound a lot like economic development wants to open large tracts of rural lands for development and to renew efforts to turn the Green Swamp Area of Critical State Concern into a busy freight route instead of a network of local rural roads along a major statewide wildlife corridor.

The presentation came during the commission’s annual retreat.

The freight route involves an estimated $170 million plan to realign Deen Still Road to reduce the sharp curves and flooded areas that slow down truck traffic and to construct a direct route through conservation lands—including a portion of Colt Creek State Park—to get to U.S. 98 more quickly.

This idea was first broached about 50 years ago when the Florida Department of Transportation oversaw most of Florida’s paved road network.

It coincides with a current FDOT plan to widen the section of U.S. 98 along the edge of the Green Swamp north of Lakeland and northward into Dade City across the headwaters of the Hillsborough River to facilitate truck traffic.

One of the new road projects involves another Green Swamp highway that would extend what is now a dead-end road called Sanders Road west of U.S. 27 to somewhere along Polk City Road, perhaps at the edge of Holiday Manor, a Black residential community, or farther north at the edge of Hilochee Wildlife Management Area Keep an eye on who owns property along the route.

The same goes another “need,” which involves an economic development project that seems to mesh with Haines City’s development ambitions. That involves extending Power Line Road in a southwesterly direction through rural lands to eventually connect to Scenic Highway at the southern edge of the city’s industrial park and any other potential development plans it will enable along the way and northwesterly to the north side of Davenport along the U.S. 17-92 corridor through more future subdivision sites. The estimated price tag is $171 million and probably likely to increase.

How will Polk County pay for all of this, you might ask.

An idea floated last year and again this year for a sales tax referendum appears dead on arrival at the moment. Check back in 2024.

That leaves two other options. One involves a plan to consider increasing transportation impact fees, which can be spent only for new projects, not fixing problems that were ignored in the past. Those fees have not been updated since 2019.

Another idea is to shift how property tax revenue will be apportioned after the road budget took over a portion of the voter-approved environmental lands referendum levy several years ago.

It was interesting that today’s presentation didn’t include a discussion of what that means to the funding of other county functions and services.

That is, if subsidizing new deveIopment is the winner, who’s the loser? 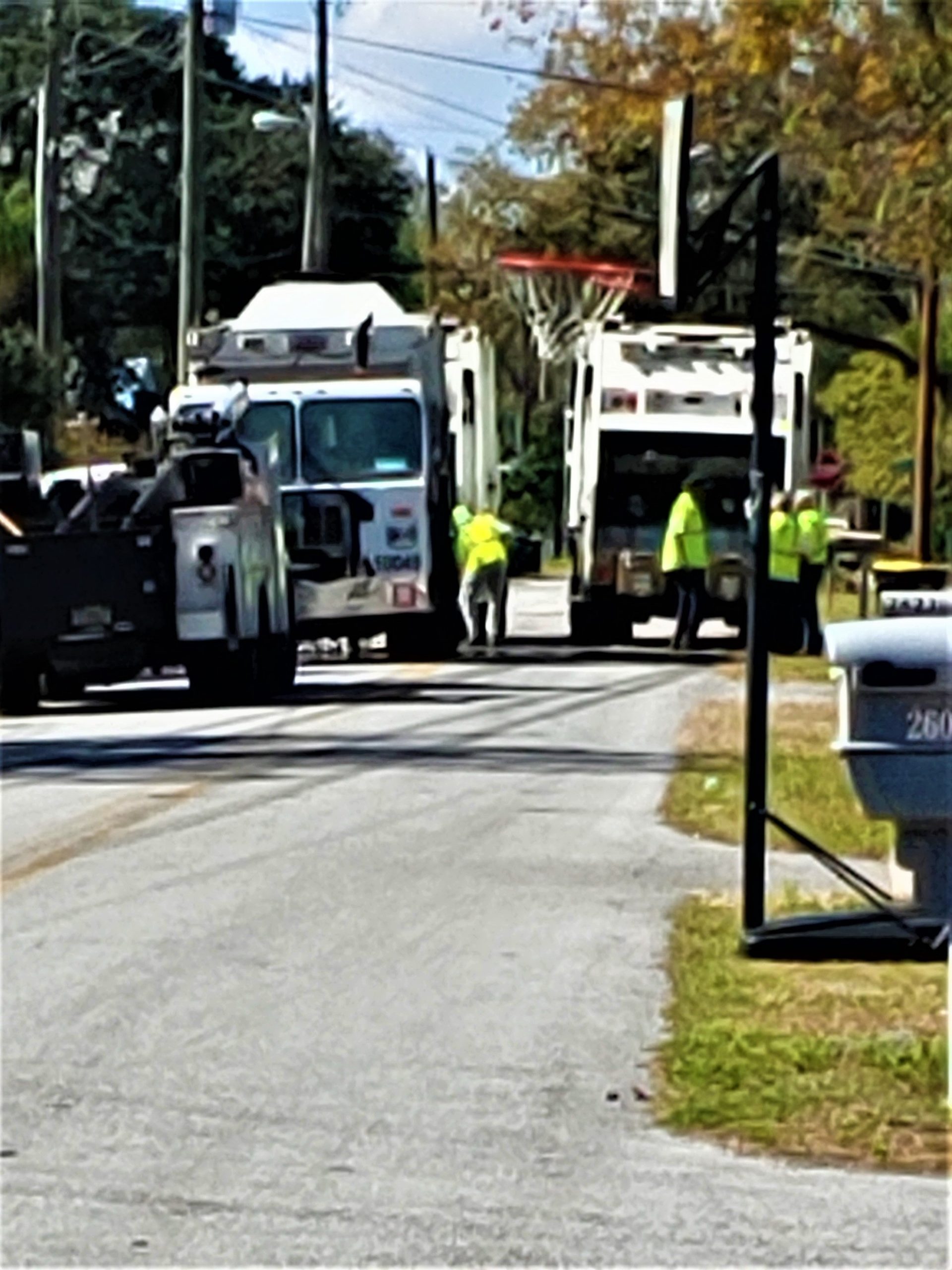 Let me see if I’ve got this straight.

The Polk County Commission contracted with FCC Environmental Services, a branch of a multinational garbage company, to collect residential garbage, recycling and yard waste every week in unincorporated areas between the Hillsborough County line and the edge of Winter Haven.

But the company’s staff regularly misses pickups, a situation that seems to have gotten worse since the company signed a contract to also collect garbage in a big chunk of Hillsborough County.

County commissioners were upset, since some of them live in areas the company serves and were not getting their garbage picked up, either. They’ve been getting an earful from constituents, too.

FCC officials showed up at a commission meeting on Feb. 1, apologized and promised to do better. However, they did worse and commissioners declared an emergency a couple weeks later because allowing garbage to sit at curbside for days after it was supposed to be picked up is a public health and safety threat.

They authorized County Manager Bill Beasley to work out a solution.

This is where it gets weird.

The solution announced today was to allow FCC to limp along with its poor service by eliminating curbside recycling for a month and then reducing recycling pickups to every other week until further notice.

In other words, customers are being penalized by receiving less service for the same cost and who knows how many tons of trash that should have been recycled will be s going to the landfill instead of the recycling center.

In earlier days this may not have mattered because there were numerous recycling drop-off centers located around the county where you could take your cans, newspapers and cardboard boxes if you didn’t have curbside service.

Since Polk County Solid Waste eliminated the drop-off center near the landfill a few years ago because Director Ana Wood said it was inconvenient for the staff to service it, all that’s left for the general public is a small drop-off facility in Auburndale maintained by Republic Services.

Another partial alternative is to save and bag your aluminum cans and take them to one of the local scrap metal businesses. Prices have risen in the past year and it may be worth the trip.

This radical change, by the way, doesn’t affect customers whose garbage and recycling is picked up by Advanced Waste Disposal, the other contractor, who has been able to operate with few problems in eastern Polk County.

It will be interesting to see how customers react.

The news about the potential for using the Peace River continues to look grim.

Flow this week is about 15 percent of the long-term average at Bartow and about 20 percent of the average downstream at Fort Meade, which is near the point where the Polk Regional Water Cooperative envisions constructing a reservoir if it can obtain a permit from the Southwest Florida Water Management District.

The latest analysis by climate scientists predicts a winter and spring drought in this part of the United States.

That points to one of the unanswered questions about using surface waters for future water supply, which is the still unknown effects of climate change.

The problem is that setting up a water supply project requires some assurance that there will be a dependable source of water to feed the future growth ambitions of Polk’s communities’ economic development boosters.

There are other things going on in the river’s watershed.

Another unknown is the effects on water quantity and quality as development has been proposed to encroach into the Peace Creek Drainage Canal, a World War I-vintage public works project that is one of the upper river’s main tributaries.

The latest proposal, which will be the subject of a public hearing before the County Commission on April 19, involves a plan for a city-sized development along the ditch in a rural area between Bartow and Winter Haven.

On Tuesday Polk County Commissioners declared the current problem with uncollected household garbage in the western half of the county an emergency.

Commissioners authorized their staff to work out the details to fix the problem with FCC, an Italy-based garbage company that has the current contract for that part of unincorporated Polk County.

What is troubling about the discussion was the suggestion that what needs to occur is to suspend collection of recycling carts or yard waste to allow the company to supposedly catch up with the collections it lately has missed around time it expanded its contractual obligations to include a big chunk of neighboring Hillsborough County.

Commissioners said this problem is widespread, but the only location they cited was Jacksonville, which formerly employed Polk Solid Waste Director Ana Wood.

Jacksonvile did suspend its curbside recycling collection in October and is scheduled to resume collections in April.

However, missing from the discussion is the fact that Jacksonville also has drop-off recycling locations that residents could have used in the meantime to prevent recyclables from ending up in the landfill.

Drop-off recycling locations once existed in Polk, but they have been eliminated.

The last one, which ironically was located near the Polk County Solid Waste & Recycling office at the North Central Landfill, was closed at Wood’s direction because it was just too much trouble to accommodate the public there.

The system has been broken for awhile because Wood and her staff have reportedly resisted efforts suggested by other county staffers, such as the Communications Department, to better inform the public about recycling policies and contamination issues.

Despite promises that they will eventually get to it, sometime or other, customer frustration and lack of transparency continue and the majority of commissioners seem uninterested in fixing the problem.

If you’re looking for a brief break from the news of all of the environmental assaults coming out of Tallahassee this year, you might want to get outdoors and clear your head this weekend and do some citizen science.

That will involve participating in the Great Backyard Bird Count, which runs from Friday to Monday anywhere you can see birds.

This is a mid-winter bird survey started 25 years ago. It is intended to gather data on the status of resident and migrant bird species. It is one of the annual surveys that gives scientists data on population and distribution trends. One interesting question is how climate change is affecting the distribution trends over the years.

Anyone can participate, but to submit data you will need to create an account on eBird, an international database for bird observations.