Objections raised by the Ancient Islands Group of Florida Sierra led to changes and the eventual defeat of a proposal to turn some local land-use and zoning cases over to a hearing officer instead of the Polk County Planning Commission.

Sierra’s objections, presented by Chair Tom Palmer, involved turning a legislative function into an administrative one, erecting unnecessary barriers to appeals and removing discretion on how any denials of the hearing officer’s recommendation would be handled by the County Commission.

County Commissioner George Lindsey, who was on the losing side of the 3-2 vote, argued this was something that would make the hearing decisions more predictable and consistent for he and his colleagues in the development community. He argued that this is simply a maturation of the growth management process that dates from the 1985 growth management law.

Sierra argued that heading in this direction may create a system in which public hearings may simply be a formality.

In response to Sierra’s comments at the first public hearing, county staff revised the section on appeals to make it more appellant-friendly.

Nevertheless, the commission’s majority remained uncomfortable with the overall concept.

Additionally, since there is no longer any strong state oversight over local land-use decisions—state officials can raise objection, but no longer have any enforcement power—further erosion of local planning oversight reduces public confidence in the system.

That’s because there is already a public perception that the way the regulations are written, applied and interpreted already gives an unfair advantage to the development community. Stripping some decision-making from the Planning Commission would reinforce that perception.

Voting to reject the proposal were Commissioners Bill Braswell, Martha Santiago and Rick Wislon. Voting to approve the change were Lindsey and Commissioner Neil Combee.

One of the most disturbing aspects of environmental politics in Tallahassee is the image of environmental advocates appealing to legislators hat in hand for money to protect more wild lands before the bulldozers advance to make way for more rooftops and pollution and habitat fragmentation.

What’s really disturbing is that some environmental organizations –Florida Sierra is not among them–celebrate the fact that the land protection programs received only a pittance of the amount to which they’re entitled.

I’m talking about the constitutional amendment voters overwhelmingly approved nearly a decade ago to set aside a portion of the documentary taxes collected in connection with real estate transactions, which often involve new development.

This is Florida and as many of you know, legislators and the rest of the so-called leadership in Tallahassee has refused to spend the money. The dispute remains in court.

This continues to be an outrage, but it is typical of what has happened time and again when the voters approved a measure the GOP-controlled Legislature didn’t like. They predictably set in motion any action they could think of to delay or undermine its implementation.

$1.1 billion sounds like a lot of money and it is, but it reflects the other reality of purchasing land or development rights that protect working lands and keep them in private ownership in Florida these days.

That is –as the headlines about housing prices indicate–that real estate is lot more expensive now than it was a couple of decades ago before the Florida Forever program was halted to deal with the economic repercussions of the collapse of the Ponzi-like real estate speculation market.

Additionally, because the Florida Forever program was sidelined for many years, there’s a lot of catching up to do to acquire lands that have already been reviewed and prioritized.

There will be a lot going on in Tallahassee when the Legislature convenes in January as there always is, but restoring land conservation funding cannot wait any longer.

Contact your legislators and tell them it is past time to pay up.

Legislative-mandated changes in how local officials can regulate the location of solar farms is coming before the Polk County Planning Commission on Wednesday.

The change will allow these facilities to be located in rural lands with only administrative review unless they fall under the Power Plant Siting Act, which so far the applicants have sized their proposals to avoid.

The only disputes have involved plans to locate a solar farm in the middle of the historic Chicora community in southwest Polk because of concerns over its compatibility with surrounding homesteads and a proposal to locate a solar farm in the northern sections of Lake Alfred because city officials wanted to develop the land for houses instead even though solar farms will require fewer city services than new subdivisions.

The solar farms will still, so far, require a willing seller rather than condemnation. The effort locally has been led by Tampa Electric, which is attempting to increase its non-fossil fuel footprint in its service area.

The plan proposed by Manatee County to treat the estimated 270 million gallons of polluted wastewater from the Piney Point gypsum stack ponds and inject it deep underground has been controversial.

Deep well injection has been used extensively in Florida as an alternative to surface discharges. The best example locally is a well near Mulberry that is used to dispose of acidic wastes that were previously discharged, causing concrete bridge supports downstream to begin dissolving in addition to the environmental damage it caused.

Proponents of deep-well injection maintain that the wells are constructed in a way that prevents the hazardous waste from escaping and polluting drinking water supplies.

But a 2012 report from ProPublica documented numerous cases involving leaks from these wells that allowed wastes to reach shallower sections of the aquifer.

This is becoming more relevant as utilities explore exploiting so-called alternative water supplies in deeper sections of the aquifer, closer to the destination of these deep-well injection projects.

Those deeper sections contain, water that are known to be contaminated by brackish water, which requires reverse osmosis to bring it to drinking water standards.

That process also involves disposing of the wastes from that process via the same deep-well injection process proposed for the Piney Point wastes.

Although the Florida Department of Environmental Protection’s regular updates on the Piney Point situation focuses on treating the wastewater to reduce concentrations of phosphorous and nitrogen, which are the target for surface water discharges, critics of the deep-well injection proposal focus on the other pollutants in the pond water that the FDEP press releases do not mention. Those pollutants consist of cancer-causing metallic and radioactive elements such as arsenic, cadmium, radium and thorium.

These and other issues are expected to be addressed if a coalition of environmental groups follow through with an announced plan to file a lawsuit to challenge the deep-well injection proposal. 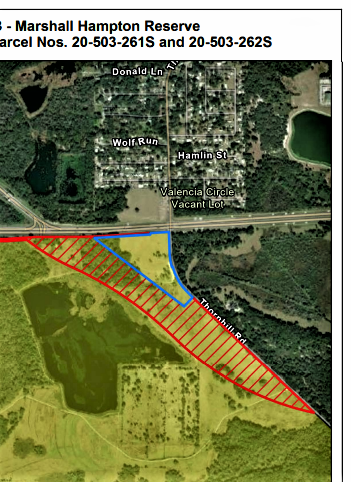 The Southwest Florida Water Management District’s Governing Board voted Tuesday to accept a $1,865,200 offer from the Florida Department of Transportation to buy 68 acres at the northeast corner of the 1,167-acre Marshall Hampton Reserve for a section of the Central Polk Parkway.

The Central Polk Parkway is a planned toll road that will connect the industrial areas around the CSX freight terminal and surrounding planned industrial facilities in Winter Haven and the Polk Parkway.

The planned road, whose construction is scheduled to begin in 2023, will wipe out the large oak hammock at the beginning of the trail system with the reserve that connects to the Panther Point Trail along the eastern and southern shore of Lake Hancock.

The agreement with FDOT calls for developing a new entrance, parking area and trailhead somewhere south of the existing entrance. Details will be announced later.

This is the second purchase of Swiftmud property around Lake Hancock related to the toll road.

Earlier FDOT paid the water management district $12 million for land that was occupied by the former Old Florida Plantation development.

The purchase of the right of way will also leave a 19-acre parcel at the corner of Winter Lake Road and Thornhill Road that Swiftmud officials plan to declare surplus and sell later.

All of the proceeds from these land sales will go towards purchasing conservation lands elsewhere in the district.

The DeSoto County Commission Tuesday was scheduled to consider an ordinance that would specifically ban gypsum stacks.

This appears to be a largely symbolic gesture since Mosaic, which is planning to mine thousands of acres in that county, has no plans to build a fertilizer plant there. Fertilizer production at these plants generates waste known as phosphogypsum because it contains, in addition gypsum, a variety of radioactive and toxic elements.

A similar arrangement to allow mining but no gypsum stacks occurred when Mosaic announced plans to mine phosphate in western Hardee County several years ago.

Hardee, which has no natural lakes, also developed a county park around some of the former mine pits to expand boating and fishing opportunities there.

One of the most environmentally offensive legacies of the long deauthorized Cross Florida Barge Canal is the Rodman Dam that prevents the Ocklawaha River from flowing freely as it did for millenia before this misguided engineering project occurred.

The efforts to halt the canal project, which was first proposed sometime before Florida became a state, involved people in Polk County such as the late Ken and Helen Morrison, who were involved in the formation of the Florida Defenders of the Environment. Also, part of the river’s headwaters begin in the Green Swamp Area of Critical State Concern. That means in the big picture, we have skin the game.

The decision has been debated for years, but recently public pressure has increased to free the river to restore the historic flow to the St. Johns River.

The latest opportunity for the public to comment involves a series of questions posted by the St. Johns River Water Management District.

To share your views, go to Rodman – Formstack . If that link doesn’t work, go to the district’s home page and click on the newsroom site at Newsroom of the St. Johns River Water Management District (sjrwmd.com)

But whatever the SJRWMD and ultimately the Florida Department of Environmental Protection decides will not be the final word.

The Florida Legislature and the Florida Cabinet have a role, too, according to an advisory legal opinion issued by Florida Attorney General Ashley Moody, which lays out the project’s complicated history